The cordwood walls and the design is starting to take shape

The third week started with making the first cordwood wall, starting with the southern facade. It was exciting to finally see some results from processing of the material. The roof was completed to the point of having a covered structure. The layers for planting will be done at a later stage.

The design was taking shape as the windows was put in place, and the building as a whole was for the first time starting to uncover. Next week will also be intense, but now most of the structure has been prepared, lots of mortar and wood have  We started to experiment on different patterns and understanding how walls can be altered. We also had to soak more clay for the last week of mixing mortar.

The weekend we spent at the coast, seeing more of the baltic sea and the surrounding environment. 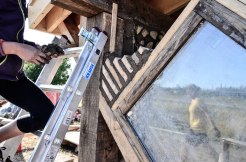